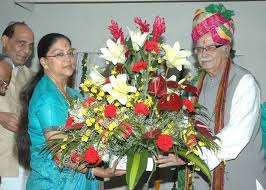 Vasundhara Raje was born on 8th March 1953 in Mumbai. She is daughter of Vijayaraje Scindia and Jivaji Rao Scindia of Gwalior, members of the prominent Scindia ex-royal maratha family. She completed her school education from Presentation Convent, Kodaikanal, Tamil Nadu, and later graduated with Economics and Political Science degrees (Hons.) from Sophia College, affiliated to Mumbai University, Mumbai.
political career
Vasundhara Raje was initiated into politics by her mother in 1982. She held a variety of posts in the Bharatiya Janata Party (BJP) and was elected to the Rajasthan Legislative Assembly in 1985. From 1989 onwards she won four consecutive elections to the Lok Sabha from Jhalawar, Rajasthan. Under Atal Bihari Vajpayee's premiership, Vasundhara Raje held independent charge of numerous cabinet departments: Small Scale Industries and Agro & Rural Industries, Personnel and Training, Pensions and Pensioners’ Welfare, Public Grievances and Pensions, Atomic Energy and Space and her most prominent role, that of the Union Minister of State for External Affairs.
In 2003, she shot to prominence by leading the BJP to its biggest victory in the state elections in Rajasthan as the State BJP President; She won from Jhalrapatan seat.

Vasundhara Raje's five-year term as Chief Minister was marked by a strong focus on infrastructure-building and social initiatives, but it was also noted for caste violence and rebellion by local leaders against Vasundhara's firm style of leadership.
As the Finance Minister, Raje was able to steer the state from a budget deficit into a budget surplus for the first time since the 1991-1992 budget, in accordance with the guidelines of the 12th Finance Commission. Rajasthan became self-sufficient in power generation, and massive road and canal-building projects were undertaken under her administration. She implemented a Tourism Unit Policy, intent on expanding upon Rajasthan's ability to cater to large numbers of tourists by increasing the number of accommodations available. She was also active in courting the IT (Information Technology industry) to open offices in the state, and oversaw the building of new schools and colleges. On the social front, Vasundhara introduced mid-day meal schemes for mothers, insurance schemes, transportation vouchers for girl students and skills training for workers.
In 2007, she was awarded "Women Together Award", by the United Nations Organization, for efforts to assist women in self-empowerment.
Post 2008 assembly elections
In 2008 Rajasthan assembly elections BJP suffered defeat and Vasundhara Raje quit as Chief Minister of state. Vasundhara now holds the position of Leader Of Opposition in Rajasthan state assembly.
Personal life
Vasundhara Raje married Hemant Singh of the ex-royal Dholpur family on 17 November 1972, Her son Dushyant Singh was elected to the Lok Sabha from her former constituency, Jhalawar.