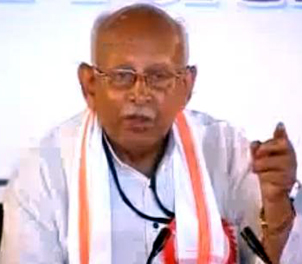 RSS former Sarasanghachalak  KS Sudarshanji no more Raipur, September 15, 2012 :  Former Sarsanghachalak Shri. Sudarshanji breathed his last this morning at 6.55 am at Raipur in Chattisgarh state. He was 81. He went for a morning walk as usual today, returned and was doing his usual course of Yogasana and Pranayama exercise, when he suffered from a massive cardiac attack. The funeral will be held at Nagpur on 16th September 2012 at 3 pm. Shri. Kupahalli Sitaramayya Sudarshan ji was born on 18 June 1931 at Raipur. He started working as a Pracharak [full time worker of RSS] in 1954. In year 2000 he became Sarsanghachalak. In 2009 he handed over the responsibility to Shri. Mohan ji Bhagwat because of receding health and advancing age. About Sudarshan ji : Born on June 18, 1931 in Raipur, it was then part of Madhya Pradesh, at the age of 9, Sudarshan ji joined RSS. He did his Bachelor of Engineering in Telecommunications (honours) from Sagar University. He became RSS- pracharak in
एक टिप्पणी भेजें
और पढ़ें