Sumit Saxena, Hindustan Times
New Delhi, March 09, 2011
Court ttells ICSE panel to remove 'pffensive passages'
A Delhi court has directed the Council of the Indian School Certificate Examination (CISCE) to exclude offensive citations of some of India’s most famous freedom fighters from its history and civics curriculum. The order is binding from the beginning of the next academic session in 1,793 schools acro ss the country. The CISCE conducts the Indian Certificate for Secondary Education (ICSE) examination.

According to the petition filed by Dina Nath Batra, national convener of Shiksha Bachao Andolan Samiti, the chapter titled Revival of Terrorism in Standard 10 history books casts a negative light on the freedom fighters.
“Bal Gangadhar Tilak, Lala Lajpat Rai and Bipin Chandra Pal have been referred to as militants and extremists, while Bhagat Singh, Rajguru and Sukhdev as terrorists,” read the petition. There are similar passages in the civics book too. The books have been published by Goyal Brothers Prakashan and written by DN Kundra.
Additional district judge Inder Jeet Singh said: “The Union of India, the ICSE and Kundra are restrained to issue appropriate instructions/guidelines, either in their regular standing instructions/curriculum/syllabus that such objectionable passages, that is, Militant, Radical, Rationalism or Extremism, Extremist, Militant Nationalism, out of desperation, they took to terrorism, terrorist remained more active, extremist party, took to terrorism, impact of revolutionary terrorism on national movement, or the like expressions, are not to be taught or published in any form by the concerned or affiliated schools (sic)”.
Monika Arora, Batra’s counsel, said: “The ICSE has taken an anti-view of our freedom fighters’ struggle, who laid their lives to free our country from the clutches of Englishmen.”
Maharashtra has 118 ICSE schools, Mumbai and Delhi have 60, NCR 30. Over 1 lakh students from Maharashtra opt for ICSE board every year.
“It is unfortunate that despite getting freedom in 1947, such objectionable and insulting portions regarding our historical past have not been removed from the course material,” Batra alleged in his petition.
His counsel argued that the current curriculum can pollute the young minds of our country.

Was Bhagat Singh a terrorist? IAS general studies paper on Oct 26 asked examinees to evaluate contribution of 'revolutionary terrorism' represented by Bhagat Singh (TOI Photo)NEW DELHI: Was Bhagat Singh a terrorist? UPSC has unwittingly triggered a debate on whether the legendary martyr should be called a "revolutionary terrorist" - a term historians have been using to describe the freedom fighter but which now, many experts say, needs a rethink because of the changed connotations of the word.
In the general studies paper of UPSC's civil services exam, held on October 26, candidates were asked to evaluate the contribution of "revolutionary terrorism represented by Bhagat Singh". In the last four days, the way the question was framed has led to a court case in Kanpur and protests in Chandigarh and Ambala, with some agitators even landing at the commission's doors.
------
2- new's
ICSE textbook calls Bhagat Singh a terrorist
by SatbirSinghBedi, August 6, 2010 17:18
From: Sandeep Pandey <sandysp4u@gmail.com>
Sender: satyapravah@googlegroups.com
Date: Thu, 5 Aug 2010 18:34:12 +0530
To:
ReplyTo: satyapravah@googlegroups.com
Subject: {satyapravah} ICSE textbook calls Bhagat Singh a terrorist
Freedom fighters Bhagat Singh, Rajguru and Sukhdev have been referred to as terrorists in a textbook of ICSE syllabus, the Maharashtra Legislative Council was informed on Tuesday. "We will write to the Central government and lodge our protest," Minister of Statefor school eduction said during question hours.
Offences against the concerned author and publisher would be registered and cases filed within a month, the minister said in a reply to a query by Sudha Joshi and Sanjay Dutt(both Congress).

Joshi said the chapter titled `Revival of terrorism' in the 10th class book of ICSE referred the trio as terrorists.

The minister said the chapter would be expunged. Orders to the effect would be issued on Tuesday itself, he said.

The state government would also set up an independent machinery to check ICSE board syllabus, he said. The government has taken the issue seriously, he added.
http://www.hindustantimes.com/ICSE-textbook-calls-Bhagat-Singh-a-terrorist/Article1-122512.aspx

On the 79th anniversary of Bhagat Singh, Sukhdev and Rajguru's martyrdom, Singh's nephew Abhay Sandhu spews venom; says Congress only wants to promote the Nehru-Gandhi family
Almost 80 years have passed since Bhagat Singh, Sukhdev and Rajguru were hanged to death on March 23, 1931, but controversies surrounding them are yet to die down.Abhay Singh Sandhu, son of Bhagat Singh's younger brother Kulbir, believes the Congress has tried to play down the contribution of freedom fighters like his uncle to promote the Nehru-Gandhi family.
Sandhu (52) told MiD DAY from his hometown Chandigarh, "Bhagat Singh was always projected as a terrorist who hurled bombs and fired bullets, which is not true. I feel this is a conspiracy of the Congress to give mileage to the Nehru-Gandhi family and marginalise the freedom fighters like Bhagat Singh and Subhash Chandra Bose as they were against the ideology of Congress."

He added that the Congress has only lately recognised Bhagat Singh, in keeping with popular sentiment. "In a recent issue of a national magazine, Bhagat Singh was rated on top in a survey while Mahatma Gandhi was number six. This shows how angry people are with the policies of the Congress," Sandhu added.

Sandhu is planning to bring out a book, which will have a collection of Singh's letters, so that "people are made aware about the pain and struggle of his friends in the war of independence".

The Congress Party with a malafide intention has deliberately done a heinous crime by marginalising leaders like Bhagat Singh and Ashfaqulla Khan. They have misused the government machinery for the publicity of the Nehru-Gandhi family."

March 23, 1931
Bhagat Singh, Sukhdev and Rajguru were hanged to death 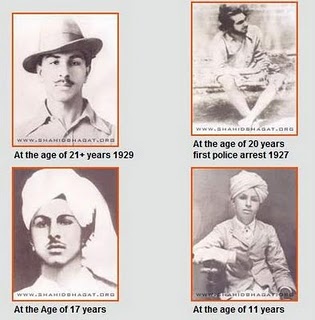 -
http://www.dnaindia.com/shahid-bhagat-singh-terrorist
A Delhi court has directed Indian Certificate of Secondary Education (ICSE) to remove defamatory references to freedom-fighters in its history and civic book from the next academic session.
The book published by Goyal Brothers Prakashan and written by DN Kundra has a chapter — Revival of Terrorism — in which Bal Gangadhar Tilak, Lala Lajpat Rai, Bipin Chandra Pal have been referred to as “militants and extremists”, while Bhagat Singh, Rajguru and Sukhdev as “terrorists”.
The court wants these leaders to be called nationalists and revolutionaries.
Additional district judge Inderjeet Singh also restrained ICSE from publishing the book with the wrong information.
While Maharashtra has 118 ICSE schools, Mumbai and Delhi have 60, NCR 30. Over 1 lakh students from Maharashtra opt for ICSE board.
The court’s order came on a petition by Dina Nath Batra, national convenor of Shiksha Bachao Andolan Samiti and others seeking deletion of defamatory passagesin the Std-X history and civics Part-II book.
The petitioners had requested the court to direct ICSE to stop teaching from the books with immediate effect as misleading information could poison the minds of youth.
“We are deeply aggrieved by the defamatory, derogatory, insulting and objectionable language used to refer to freedom-fighters who laid down their lives for our country and the people. It is unfortunate that despite getting freedom in 1947, such objectionable and insulting portions regarding our historical past have not been removed from the course material,” their petition reads.
प्रस्तुतकर्ता http://arvindsisodiakota.blogspot.com/ पर 12:20 am 1 टिप्पणियाँ