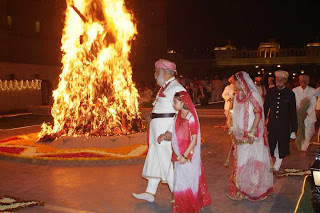 BY  - Neena Sharma  Holika Dahan, Kathamandu, Nepal--Holika-26-03-2013 Holika (Sanskrit: होलिका) was a good demoness in Hindu scripture who was burnt to death with help of God Brahma by Prahlad. She was the sister of King Hiranyakashipu. The story of Holika's conflict signifies the triumph of good over evil, and death of Holika is celebrated as Holi. Mythology According to Hindu scripture, there was a king named Hiranyakashipu whose desire was to be seen as a great man. To fulfill his desire he did the required Tapas (penance) and was granted a boon by Brahma. Once Brahma was pleased by devotion of Hiranyakashyapu, he granted the king wishes that the king will not be killed by human being or an animal, he will not die either in his home or outside the home, he will not die in the day or at night, he will not die either by astra or shastra, and that he will not die either on land or in the sea or in the air. As this wish was granted, it was completely impossible
एक टिप्पणी भेजें
और पढ़ें
ज़्यादा पोस्ट