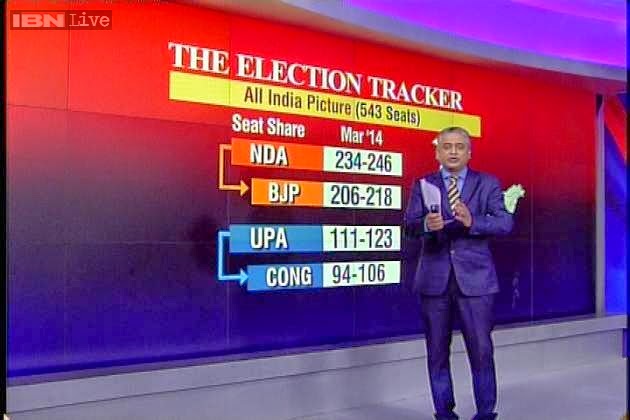 http://ibnlive.in.com/news National tracker: Modi-powered NDA may get 234-246 seats, UPA 111-123 CNN-IBN, The Week & CSDS | Apr 04, 2014 The Bharatiya Janata Party-led National Democratic Alliance (NDA) is almost certain to form the next government according to CNN-IBN-CSDS-Lokniti-The Week national election tracker. The NDA is projected to get 234-246 Lok Sabha seats in the elections while the Congress-led United Progressive Alliance (UPA) is likely to bag just 111-123 according to the projections by Chennai Mathematical Institute Director Rajeeva Karandikar. The survey indicates that BJP prime ministerial candidate Narendra Modi is propelling the NDA to power at the Centre. When compared to 2009 Lok Sabha results, the NDA almost doubling its seats and the UPA is losing half of its seats. The worse thing is Congress may get less than 100 Lok Sabha seats for the first time in its history. According to election tracker the Congress may get 94-106 Lok Sabha seats on its ow
एक टिप्पणी भेजें
और पढ़ें
ज़्यादा पोस्ट