When is Karva Chauth & Story 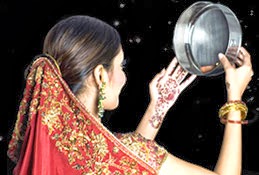 http://www.astrocamp.com/karva-chauth-in-2012.html
Karwa Chauth in 2013 will be celebrated on 22nd October. It’s not just a fast but has deeper meaning. Karva Chauth is a fast undertaken by married women who offer prayers seeking the longevity, prosperity and well being of their husband. Over years, this fast has become very popular among youngsters too, who fast for their partners. The calculation of the date of Karva Chauth in 2012 is on the basis of the traditional Hindu calendar. Generally, Karva Chauth falls about nine days prior to Deepavali as Kartik Chauth somewhere in October and November.
This fast is particularly popular in North India and there is more to the fast as it is an occasion for women to indulge in a lot of fun and frolick. Wearing bright colourful clothes, beautiful ornaments and flaunting exquisite henna designs on their hands, women celebrate it like a festival with tremendous fervor. Married women dedicate the evening to rituals, offering prayers to Goddess Gauri seeking her blessings for a happy married life. Competitions, non-stop dancing, great music and good food make the fast an interesting one. It wouldn’t be wrong to say that Karva Chauth in 2013 will be one of the most awaited occasions for women all over India and Indians abroad. The main element of the Karwa Chauth in 2013 will be beautiful women dressed in red sareer observing fast for the long and successful life of their husbands. According to Hindu scriptures, a husband is more than just a life partner. He becomes her protector after she leaves her parents home. Her husband provides her with food, shelter, clothing, respectability, comfort and happiness and so this bond is primarily a sacrosanct one.
Literally, the term 'Chauth' means the 'fourth day' and 'Karwa' which is an earthen pot with a spout. This is symbolic of peace and prosperity – this earthen pot is necessary for the rituals. If Karwa Chauth in 2012 is your first such fast, here a brief outline of some important rituals to follow:
Karva Chauth in 2013 will see women home or in the colony gather sing, dance and narrate and hear the vrat katha together. All this adds significance to the celebration. The festival of Karva Chauth had emerged as a day to celebrate the onset of autumn and spend time with friends and relatives. Many connect it with mythological legends that give the festival a religious significance. All Hindus as well as Sikhs celebrate this festival passionately in the North-Western region of India. Very recently some men also forsake food for the day, in order to show their love and support for their wives. For those observing Karva Chauth in 2013, here a legend associated with the occasion that you might find interesting:
Long long ago there was a pious lady called karwa who lived with her husband on the bank of a river. While bathing in the river a crocodile caught hold of him. He yelled his wives name for help. Karwa ran to help her husband and to do so she tied the crocodile with the help of a yarn. After that she went to seek help from Yamraj( the god of Death) asking him take away the life of the crocodile and save her husband. Yamraj explained that it was not possible as the crocodile was meant to live its life span. This angered Karva who warned Yamraj of her curse to kill him. Yamraj got scared for he knew that Karwa had spiritual power. He went and saved her husband killing the crocodile and banishing him to Hell. Thus, the pious Karwa saved her husband’s life. For years, women have been celebrating Karva Chauth as an expression of a woman love for her man.
For some women, Karva Chauth in 2013 will be like reliving a Bollywood fantasy, for others it's all about decking up head to toes in the finest jewelry and clothes and for some it is just a fad. However, this sacred fast to pray for the husband's long life, Karva Chauth has evolved into a modern-day festival as in contemporary times it is celebrated as a romantic occasion. The bustling market areas flocked by women purchasing jewellery, bangles, sindoora and other puja related items is sure to signal that Karwa Chauth in 2013 is near. The festivity has for years not lost its spirit and color, and is observed ardently by the women and men all over India. On this occasion what more can we say to our visitors than- Happy Karva Chauth 2013!! 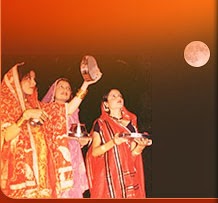 
"A long long time ago, there lived a beautiful princess by the name of Veeravati. When she was of the marriageable age, Veeravati was married to a king. On the occasion of the first Karva Chauth after her marriage, she went to her parents’ house."

"After sunrise, she observed a strict fast. However, the queen was too delicate and couldn’t stand the rigours of fasting. By evening, Veeravati was too weak, and fainted. Now, the queen had seven brothers who loved her dearly. They couldn’t stand the plight of their sister and decided to end her fast by deceiving her. They made a fire at the nearby hill and asked their sister to see the glow. They assured her that it was the moonlight and since the moon had risen, she could break her fast."

"However, the moment the gullible queen ate her dinner, she received the news that her husband, the king, was dead. The queen was heartbroken and rushed to her husband’s palace. On the way, she met Lord Shiva and his consort, Goddess Parvati. Parvati informed her that the king had died because the queen had broken her fast by watching a false moon. However, when the queen asked her for forgiveness, the goddess granted her the boon that the king would be revived but would be ill."

"When the queen reached the palace, she found the king lying unconscious with hundreds of needles inserted in his body. Each day, the queen managed to remove one needle from the king’s body. Next year, on the day of Karva Chauth, only one needle remained embedded in the body of the unconscious king."

"The queen observed a strict fast that day and when she went to the market to buy the karva for the puja , her maid removed the remaining needle from the king’s body. The king regained consciousness, and mistook the maid for his queen. When the real queen returned to the palace, she was made to serve as a maid."

"However, Veeravati was true to her faith and religiously observed the Karva Chauth vrat . Once when the king was going to some other kingdom, he asked the real queen (now turned maid) if she wanted anything. The queen asked for a pair of identical dolls. The king obliged and the queen kept singing a song " Roli ki Goli ho gayi... Goli ki Roli ho gayi " (the queen has turned into a maid and the maid has turned into a queen)."

"On being asked by the king as to why did she keep repeating that song, Veeravati narrated the entire story. The king repented and restored the queen to her royal status. It was only the queen’s devotion and her faith that won her husband’s affection and the blessings of Goddess Parvati."
प्रस्तुतकर्ता http://arvindsisodiakota.blogspot.com/ पर 11:24 pm 0 टिप्पणियाँ